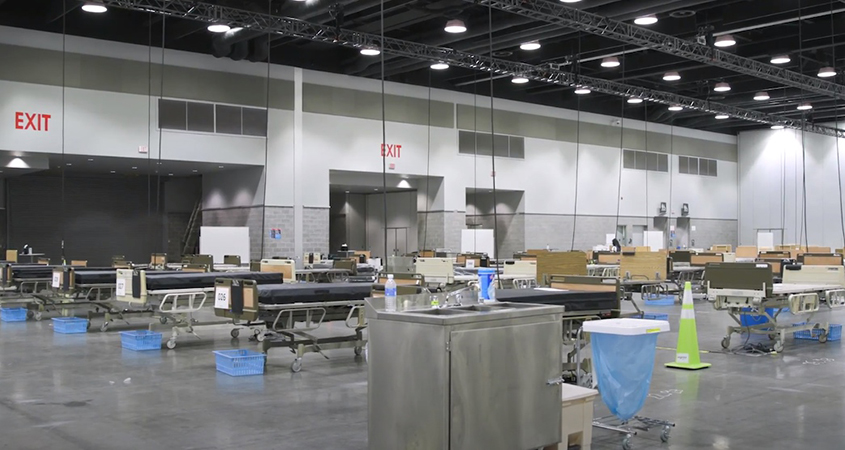 Convention centres have been hit hard by COVID-19, with many still seeing staff layoffs and rising budget deficits nine months into the pandemic. Although a coronavirus vaccine is on the way, there’s still a long road ahead as it may be summer or even longer until the vaccine is available to everyone. And then, even after the health crisis is under control, attendees may not flock back to in-person events, at least right away. As a result, venues are expected to continue to feel the economic fallout throughout next year, perhaps even beyond.

In Saskatoon, the city’s two largest entertainment venues, TCU Place and SaskTel Centre, are projecting $2.1 million and $1.6 million losses, respectively, for 2021. This on top of the expected $2.3 million deficit TCU Place is facing down this year. SaskTel Centre anticipates to record a deficit of $3.6 million.

Similar stories can be found across the country. The Halifax Convention Centre has taken a huge financial hit, with total losses for the current fiscal year to add up to more than $11 million — almost double the amount that was projected pre-pandemic. In Winnipeg, what was supposed to be a banner year for the RBC Convention Centre has gone bust, with management asking the City for a $7.5 million loan. Further west, revenue for Edmonton’s Convention Centre and Expo Centre is down approximately 70 per cent in 2020.

“During a typical calendar year, both venues host a combined total of nearly 800 events and welcome more than 1.8 million guests,” says Arlindo Gomes, vice-president of venue management at Explore Edmonton, a rebranded version of the Edmonton Economic Development Corp. that operates the Convention Centre and Expo Centre. “As we were only able to operate at full capacity in Q1 of 2020, approximately 75 to 80 per cent of Convention Centre and Expo Centre events have either cancelled or postponed to a later date.”

The absence of large-scale events has prompted venues to repurpose their spaces for unconventional uses. For instance, in March, just 12 days after the World Health Organization declared COVID-19 a pandemic, the Edmonton Expo Centre opened its doors to the city’s homeless. For the proceeding five months, it served as a daytime drop-in centre for this vulnerable population, offering access to beds, laundry, meals and showers, along with other supports. At the same time, a separate portion of the facility was set up as an isolation centre for people experiencing homelessness who have COVID-19 symptoms. On-site virus testing and areas for quarantine were also provided.

In October, the Edmonton Convention Centre converted operations to become the city’s 24/7 pandemic shelter space through to March 2021. Replacing services administered at the Expo Centre during the early days of the pandemic — the Expo Centre now serves as a COVID-19 testing site with the capacity to collect 5,000 swabs per day — the Convention Centre can accommodate 300 people overnight and 400 people during the day who are considered homeless.

While shelter and testing operations have enabled Explore Edmonton to offset some ongoing maintenance costs at the two facilities — the combined 672,000 square feet of event space still needs to be heated, secured, cleaned, lit and generally maintained regardless of whether booked or not — these temporary uses do not produce substantial revenue. However, they have resulted in the retention and recall of more than 150 staff who are responsible for ongoing security, food and beverage service, housekeeping, maintenance and operational support. Gomes says this puts the venues in a better position to return to regular business operations once public health restrictions are lifted.

“As stewards of two important public facilities, we have a responsibility to use our spaces and resources for the betterment of our communities — it is simply the right thing to do,” he says. “Throughout this pandemic, we have seen convention and event venues step up in similar ways across North America.”

The Vancouver Convention Centre is another example of a Canadian facility that has pivoted for the public good while it awaits the safe return of events. The waterfront centre, whose events generated approximately $360 million in economic impact last year alone, serves as an alternate care site for Vancouver Coastal Health (VCH). The West building was established as such in early April to free up critical care space in hospitals if virus spread worsens — a process that took just 17 days. It contains 271 beds, increasing provincial hospital bed capacity for lower acuity, non-COVID-19 patients, as well as four nursing stations, patient and staff showers and washrooms, oxygen and medical supplies. Bed spaces have been set up in a pod format with approximately 25 patients to a dedicated healthcare team.

“This was an unprecedented and unique task for all of us,” says Craig Lehto, general manager of the Vancouver Convention Centre. “It required a great deal of efficient planning and collaboration to ensure the site could be completed and ready to be operational quickly, if needed.”

To date, the makeshift hospital has not been used; however, it remains on ‘standby’ for the foreseeable future as cases in the province once again climb.

The Vancouver Convention Centre is not charging VCH rent for the alternate care site. Instead, Lehto says it has adopted a cost recovery model with charges to the client only associated with pass-through expenses for rigging and telecommunication setup, as well as an offset of utilities costs.