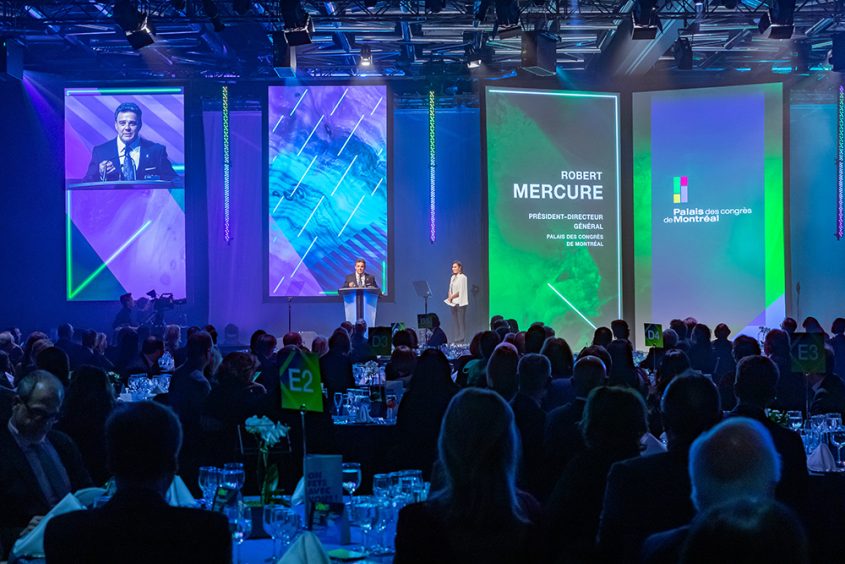 It was an evening for industry celebration and peer appreciation during Palais des congrès de Montréal’s Ambassador Club Recognition Awards Gala. Held February 5th at the acclaimed downtown venue, the evening turned a deserved spotlight on 17 luminaries who played an active role in attracting 11 international conferences to Montréal. Their combined efforts resulted in attracting thousands of visitors from across the globe and generating an estimated $83 million in tourism revenues.

“The Recognition Awards Gala celebrates the dedication of our Ambassadors, who volunteer their time to securing major events,” said Robert Mercure, President and CEO of the Palais des congrès de Montréal, adding, “I thank them and I salute their determination and contribution to making Montréal the city in the Americas hosting the most international conventions.”

The honour of Grand Ambassador was given to Professor Rémi Quirion, Chief Scientist of Québec. He received the night’s highest distinction for his part in promoting scientific culture, providing international exposure for Québec researchers, and galvanizing the research community. These efforts were central to attracting numerous high-profile scientific events to the City.

“I am very proud indeed to receive the title of Grand Ambassador as it recognizes the research community’s pivotal role in securing and organizing scientific conferences at Palais des congrès de Montréal,” Quiron said. “These conferences serve to disseminate knowledge, promote interaction among researchers from all disciplines, and spur scientific tourism.”

Both took the opportunity to reveal the recipients of their own industry awards. FRQ’s Relève étoile award for research excellence went to Étienne Boulais, Pierre-Alexandre Goyette, Anne-Julie Tessier, and Cyndi Boisjoli; while IRSST announced Ambassadors Club scholarships in promotion of occupational health and safety research to two researchers, Marie-Élise Parent and France Labrèche.

In founding the Ambassadors Club in 1985, Palais des congrès de Montréal positioned itself as a pioneer. Today, destinations around the world have emulated its international market development strategy of drawing on the repute of local influencers. Speaking to the most recent honourees and the group as a whole, Québec’s Minister of Tourism Caroline Proulx noted, “I wholeheartedly salute the exceptional work of these men and women of action who have turned an international spotlight on our destination. Their role in bringing high-caliber events to Palais des congrès de Montréal makes them truly outstanding allies. They help generate major economic and intellectual spinoffs for Montréal and for Québec as a whole.”

“Their commitment makes the Palais a business tourism leader,” she continued. “Hats off to

the new Ambassadors, the Palais des congrès managers, and all their partners!”