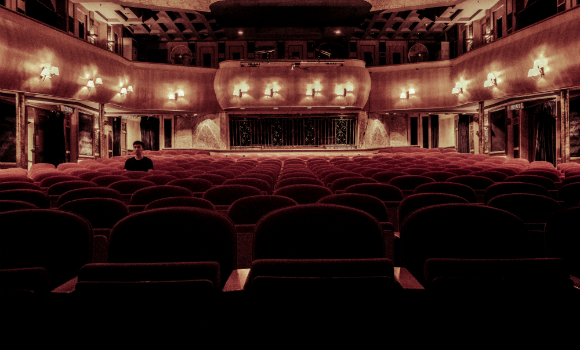 All together now: There’s no business like the event planning business, there’s nooo business I know!

I get it. It doesn’t have quite the same ring to it. But, when you really think about it, planning an event and putting on a show are really not that different. You have to think about content, timing, logistics, snacks, sound, the audience experience, snacks, lighting, pacing, and snacks (people really like snacks). That’s a lot of stuff.

Most big events follow a pattern. Sometimes it’s a necessity, but sometimes we fall into patterns that are hard to break, even when they may not be the most productive. Let’s face it, we’ve been to (and admit, have probably planned) events that go something like this:

You get the idea. So how can we get more creative in the events we plan?

At the Second City, we’ve been putting on shows since 1959. And when I say putting on shows, I mean constantly. We never close. And when you do that many shows for that long for so many people, you have to be creative.

So, whether your event is a show or your show is an event. Here are some things to help you get more creative and insure that your audience in engaged and leaves satisfied. When we think about shows, we often ask a few simple questions.

Sounds simple, but this is often the trickiest one. Why are we doing this event? Why are we doing it here, now? The more simple and clear the answer to that question, the better off you will be. Answering this question clearly and boldly will help you answer a lot of other questions. Why does the audience enter this way? Why are they sitting at tables and not just in chairs? Why is the stage at this end and not in the middle? All these questions and their answers should lead back to the central focus.

Often followed closely by “if?” When we create comedy, we constantly ask what if? What if, instead of a crappy apartment, Chris Farley’s legendary Saturday Night Live character Matt Foley lived, I don’t know, in a van  down by the river? One’s funny, but the other’s hilarious. See how long you can ask “what if?” What if the snacks all followed a theme? What if the stage was in the middle and round? What if there were two stages and the action shifted from one to the other? What if we played a giant game of rock-paper-scissors between speakers just to shake things up? What if we were in a van down by the river? Okay, maybe not the last one, but you get the point.

As in, how do you want the audience to feel when they’re at your event and after they leave? At The Second City, we are always thinking about the audience experience. And the how doesn’t have to be big. Small things like treats on a table, longer or more frequent breaks, a short piece of entertainment placed in the day for the simple purpose of bringing some levity to a long line of speakers. Little things can add up to a big impact.

And here’s the final challenge. When you ask yourself these simple questions, don’t accept simple answers. Putting on a show is all about taking some risks, they may not all hit but people will appreciate the fact that you tried to do something new, fun and different. I mean, let’s face it, nobody walks into an event and says, “I sure hope this is exactly like the last 15 of these I’ve been to.”

In improv, we have a saying: “Don’t be afraid to go out on a limb. That’s where the fruit is.” So go climb that tree.