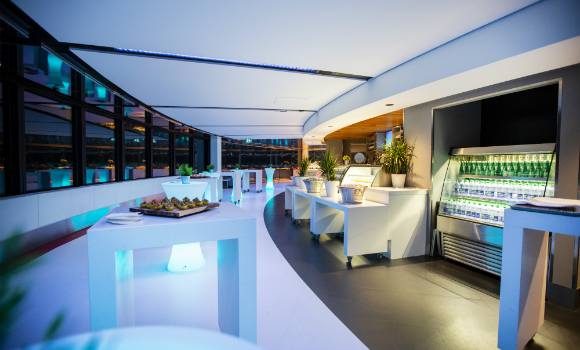 Event planners take note: After nearly a year, the CN Tower’s $16 million renovation of its main observation deck is open to the public and for private events. Toronto-based — and appropriately-named, given the venue — Cumulus Architects revamped the space, modernizing it, making it more accessible and Toronto’s cityscape more visible. 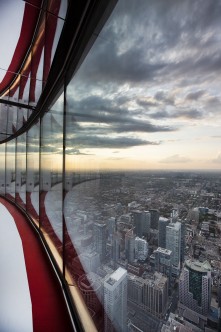 To that end, massive, 448 kg floor-to-ceiling windows were installed along the length of the deck, giving those with mobility issues or disabilities unhindered access to the view of the city from 346 metres up. A thermochromatic film on each pane reacts to the external temperature and sunlight, allowing for clearer photographs and better ‘grams. Other improvements toward the tower’s accessibility include carefully placed outlets and door handles, as well as colour-coded floors.

Cumulus also added a second tier of glass floors above the lower level’s, providing a striking (if mildly unnerving) view through two storeys, and then down 113 more.

Inside, earth tones and pale, neutral shades of white and grey give the deck a minimalist feel, while the mirrored ceiling lends a spacious, bright airiness to the deck. The decor is sleek but not attention-grabbing, nor is it meant to be; the obvious environmental draw is what’s outside the glass.

The deck’s space is scalable, and can be arranged to comfortably host anything from 80 to 800 people, with catering provided by the in-house 360 Restaurant, which emphasizes local ingredients and Canadian wine. Add in the restaurant’s space, and the CN Tower can host up to 2,000 people for a massive soiree. The tower also features conference rooms and a theatre, so event and conference attendees can get a bit of work done — assuming, of course, that they’re not all too taken by the view.