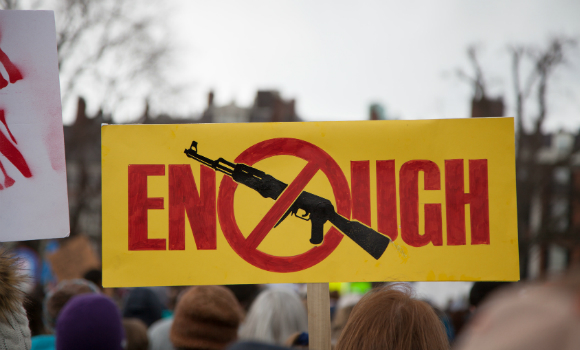 On February 14, 2018, a mass shooting occurred at Marjory Stoneman Douglas High School in Parkland, Florida. Seventeen people were killed and 17 more wounded. It seemed yet another tragic shooting of numerous innocent victims that provokes intense political and media interest for a few days and then is eclipsed by other events.

In this case, the Parkland shooting has gained a momentum that has grown in news coverage, causing a number a special interest groups to wade into the larger issues of second amendment rights, such as gun control, the culture of violence and mental health. On one side is a wide range of gun control proponents and on the other are those defending constitutional protections. The National Rifle Association (NRA) has quickly become the target of the outraged gun-control activists to which NRA supporters have responded with no less sulfuric vitriol. The emotional stridency of the debate has made it easier to shout and harder to hear. As a consequence, the benefit of a public conversation on these issues diminishes and the broader perspective is lost.

Into this Parkland vortex of grief, anger and recrimination are drawn a number of well-regarded companies who risk becoming commercial casualties. As with a number of organizations, the NRA offers its five million members discounts on airfares, hotels, car rentals and the like.

The pro-gun control movement has quickly targeted those companies offering NRA discounts demanding that they terminate their agreements with the NRA. A number of companies have complied, including car rental companies Enterprise, Alamo, National Car Rental, Hertz and Avis; Norton AntiVirus and LifeLock; MetLife; SimpliSafe, a home security company; and Best Western and Wyndham hotels.

Two companies of particular interest are Delta Airlines and FedEx.

Delta, headquartered in the State of Georgia, cut its ties with the NRA. As a result of popular outrage against Delta, the state legislature denied Delta a $50 million tax break. On the other side, FedEx refused to terminate its relationship with the NRA saying that “it’s a common carrier, and will not deny service based on political views or policy positions”. Needless to say, its decision was met with scandalized shock and numerous threats.

What are we to learn here?

Companies caught in these controversies quickly find themselves in a no-win situation. No matter what they decide, shareholder value will be put at risk. Once reason is replaced with passion, it is difficult explaining a corporate position. Questions such as, “Is it because you believe it’s okay to gun down children in school that you won’t support us?” are difficult to answer.

I have felt this pressure first hand. When I was working as a Canadian diplomat during the 1980’s in the US, I was charged with defending the Canadian seal hunt. A number of activists were promoting a boycott of Canadian products and tourism until the Canadian government banned the seal hunt. I would try to explain the economic importance of the seal hunt to Newfoundland fishermen (some of the finest people you could ever meet) and that the US conducted its own seal hunt in Alaska. The activists would respond by showing a picture of an adorable little seal pup being bashed on the head and asking, “So you like doing this, do you?” I could feel the rest of the audience turning colder than an arctic winter.

BOT who is behind this? Companies not only find themselves confronted with forceful and articulate activists backed by sympathetic media, but huge volumes of social media messages also deluge them. In many cases, this support is far overstated. BOTS, which are a particular type of computer-generated social media message, are the source of these messages. Those thousands of messages may not be from many real people but is one person’s handiwork alone.

Social media moves faster than a bullet. The Parkland tragedy and similar events have demonstrated how both sides of an issue can mobilize within minutes. There is no time for a company to develop a response and communications strategy once it finds itself in the crosshairs of a crisis. Contingency plans must be thought out far in advance and activated instantly.

This is not an aberration but a constant reality that always lurks around the next corner. The event can be global but it can also be local. In fact, neighborhood activists are the quickest to mobilize and target opposition. In one example, an activist group targeted police marching in an annual city gay pride parade. Within hours, companies sponsoring the parade were being asked if they were for or against the police. The parade organizers quickly excluded the police from future parades, prompting groups supporting the other side to demand commercial sponsors withdraw in support of the police.

What is the best solution?

Regrettably, there is no best solution, only the least bad solution. The breadth of issues promoted by one activist group or another is limitless. The social media driven sense of outrage will only fuel further anger and threats to which reasonable responses will fall on deaf ears.

It is preferable to argue the principal once than the merits of every issue again and again. In other words, FedEx got it right and Delta will pay for their decision many times over. FedEx’s point that it is a common carrier and “does not deny service based on political views or policy positions” is a principle that can apply fairly to all issues. Whereas Delta will have to argue every issue for which they are asked to take a stand. They will time and again be met with the demand, “if you took a stand against the NRA, surely our issue is just as important. Why wouldn’t you also support us?”

The best route is for a company to state in advance its principles clearly and publicly. For example:

“We are proud to support the communities in which we operate through charitable donations and sponsorships. We believe in the critical role of civil society debating and resolving the great social and economic issues that we face. When there are issues that directly impact our company and employees, we will make our positions clear. However, we do not believe it appropriate for our company to use its commercial position to support any particular side of these broader debates. They are best resolved by the citizens of the community and its elected representatives.”

Such a position should be made public, given prominence on your website and constantly repeated. Many applicants for support will not be happy with such a reply but at least they will not be surprised. These days, it might be the best that you can hope for.