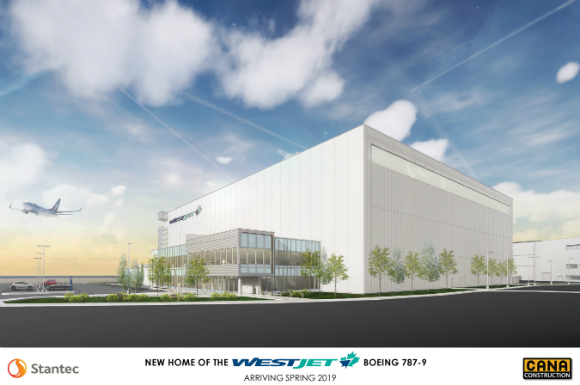 WestJet has broken ground on its new $50 million hangar project at YYC Calgary International Airport that will support the airline’s ongoing fleet expansion and growth of its Calgary hub. The hangar, once complete, will occupy 125,000 square feet, accommodate its new Boeing 787-9 Dreamliner aircraft and stand eight stories tall.

“WestJet is the largest carrier at YYC Calgary International Airport and is a major driver of growth in the city,” said Gregg Saretsky, WestJet President and CEO. “With the impending arrival of our Boeing 787-9 Dreamliner aircraft, WestJet is connecting Canadians to the world and bringing the world to Canada. Our partnership with YYC, our growth strategy, and the needs of our guests are the reasons we decided to add our wide-body hangar with our head offices here at YYC.”

“YYC Calgary International Airport is the home base for WestJet, and we are thrilled that they continue to see success by investing in their YYC hub,” said Bob Sartor, President and CEO for The Calgary Airport Authority. “As we work together to strengthen Calgary’s ties to business and leisure markets, this latest investment will position WestJet and YYC for continued growth, bringing a host of new economic opportunities to the city and region we serve.”

The hangar, which was designed by Stantec and is being constructed by CANA, will accommodate up to four Boeing 737 aircraft or one Boeing 787-9 Dreamliner. In addition, the building will have two floors of office space to hold approximately 130 work stations. Construction is expected to be completed in the spring of 2019.

“Stantec is excited to partner with WestJet once again, leading the design of their new hangar project as they continue the expansion of their fleet, and solidify their presence in Calgary,” said Russ Wlad, Executive Vice President, Canada, Stantec. “We are proud to support the communities we serve, and this transformational project is the beginning of a new era at YYC – connecting more people to the City of Calgary and beyond. Our local team of architects and engineers are passionate about being part of this project and the positive impact it will have on WestJet’s growth in our community, in our province, and around the globe.”

“CANA is once again excited to be working with WestJet and the Calgary Airport Authority on the new WestJet Hangar and home for its Boeing 787-9 Dreamliner aircraft,” said Blaine Zandbelt, Vice President Operations, CANA Construction. “WestJet is an industry leader and CANA is proud to be its long term partner delivering projects on time, on budget and to the high level of quality that WestJet is known for.”

Since WestJet’s inception in 1996, the airline has grown its Calgary hub from first serving five domestic destinations to becoming an international carrier flying to more than 50 destinations out of YYC.

WestJet operates approximately 110 flights a day or about 56,000 flights per year from Calgary, flying around 11 million guests in and out of the city each year. In April 2017, the airline announced the purchase of 10 Boeing 787-9 Dreamliner aircraft with an option to purchase 10 additional aircraft. Expected arrival of the first aircraft is January 2019.