First, there was Brexit. Next came the Trump Administration’s first travel ban, which cost the United States $185 million in business travel bookings in one week. It was followed by a second travel ban, which like the first, was halted by court orders. After that, the United States Department of Homeland Security (DHS) barred passengers travelling from 10 airports in eight Middle Eastern and African countries from bringing laptops and other large electronics into the cabin as carry-ons. Hours later, the United Kingdom followed suit issuing their own electronics ban on inbound flights from six countries, impacting six UK airlines and eight foreign airlines. Now an expanded electronics bans on flights into the United States from Europe appears imminent.

Using first quarter ticketing data from the Airlines Reporting Corp. (ARC), publicly available travel data and GBTA’s economic research and models, GBTA developed an ‘uncertainty forecast’ for 2017 showing the impact this mounting geopolitical uncertainty is having on the economy. There is no question that uncertainty is bad for business travel and bad for the global economy.

GBTA projects a loss of over $1.3 billion in overall travel-related expenditures in the United States in 2017 including hotels, food, rental cars and shopping expenses that inbound travellers would have spent. That includes $250 million lost in spending from inbound business travellers from Europe and the Middle East. The even greater concern is that the longer-term impact on business travel will become even larger as companies begin to host meetings and events in other destinations. In an earlier survey of GBTA’s European members, 45 per cent indicated their company will be less willing to plan future meetings and events in the United States due to executive orders on travel. 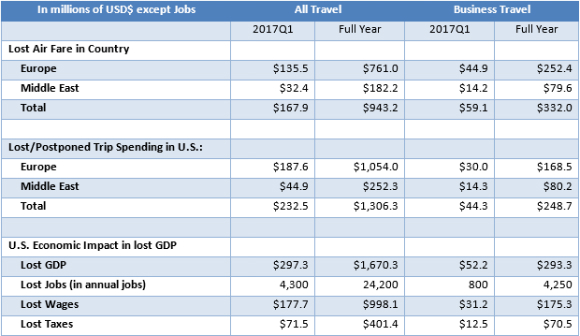 It is not unprecedented for the negative perception around government policy to result in real economic losses. Before the controversial HB2 ‘bathroom bill’ in North Carolina was repealed, an AP analysis projected the law would cost the state more than $3.76 billion in lost business over a dozen years. A survey from the tourism group Visit Indy revealed Indiana’s religious objections law may have cost the state as much as $60 million in hotel profits, tax revenue and other economic benefits.

As we await the verdict on a possible expansion of the electronics ban, we have yet another uncertainty factor. While it is certainly different from the travel ban executive orders, and there is no doubt that the electronics ban is based on a clear security threat, it is the cumulative impact of anti-travel policies that leave the perception to many that the United States is closed for business. It goes without saying that GBTA strongly supports all efforts keep our skies safe, but we encourage TSA to pursue alternative options to effectively reduce the risk of terrorism.

If it is in the best interest of security, business travellers are willing to comply with these types of measures, however, most business travellers would much rather accept a far more rigorous screening at the airport than part with their devices. Nearly half of business travellers prefer to stay connected and get work done while flying. Not allowing them to bring their devices on the plane reduces productivity and that comes with a cost to the tune of nearly $900 million if expanded beyond Middle East countries to Europe.

Business travel drives lasting business growth and is a leading indicator for jobs and the economy at large. Continuing to enact policies that discourage business travel will cause a rippling effect across the travel industry and the overall economy. We urge the Trump Administration to consider the important lasting impact of business travel and enact policies going forward that preserve both our national security AND our economy for the future.