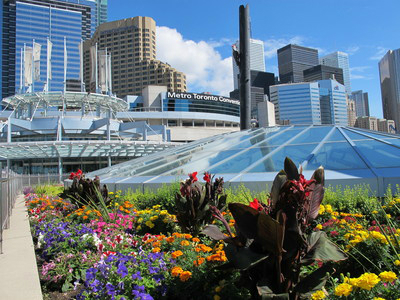 The Metro Toronto Convention Centre has partnered with the mobile app Voyage Control to enhance the move-in experience for exhibitors, marking the first North American convention centre to offer this innovative solution.

Voyage Control allows exhibitors to easily pre-reserve a time on their mobile device for unloading exhibitor/booth materials directly at the Metro Toronto Convention Centre instead of being redirected to the marshalling yard, resulting in a time savings of approximately 20 minutes per exhibitor. This “fast track” smart software also offers instant communication from dock staff and permits exhibitors to clearly show their estimated time of arrival and exact location to other team members.

“We are thrilled to be the first convention centre in North America to establish a partnership with Voyage Control,” said Vince Quattrociocchi, vice president of operations at the MTCC. “This initiative represents our ongoing commitment to innovation and offering sustainable solutions. Moving in our events more efficiently with this mobile app is a real game changer.”

“We look forward to continue working with the MTCC to bring world class innovation to Toronto,” said James Swanston, CEO of Voyage Control. “Voyage Control will optimize the logistical efficiency for exhibitors while having a positive impact on the environment by decreasing traffic congestion and wait time.”

The app was launched with over 125 exhibitors who had substantial booth materials at the onset of Toronto ComiCon 2017 with successful results. The estimated total driving distance saved by the exhibitors who participated was 500 kilometres, the equivalent of driving from Toronto to Montreal. Subsequently, this initial trial also contributed to an estimated decrease in C02 emissions by 144kg.

“Fan Expo HQ was excited to partner with the MTCC and Voyage Control for Toronto ComiCon 2017,” said Andrew Moyes, Vice President of Informa Canada. “I was delighted to see our exhibitors embrace the new technology and their response to the experience has been overwhelmingly positive.”