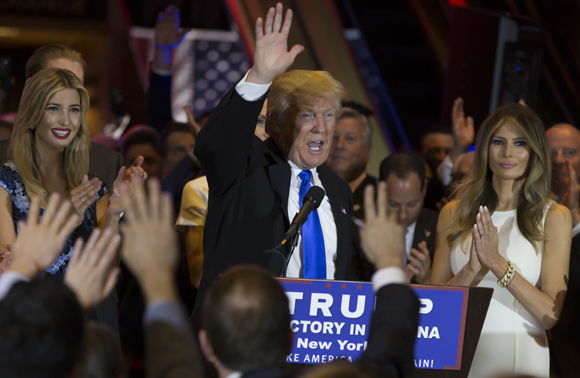 The U.S. presidential election is finally over. Since Donald Trump descended the escalator of the Trump Tower on June 16 of last year to announce his candidacy for President of the United States, there have been a stunning series of unforeseen events. All the old rules are now obsolete. These events seem to conclude that the experts are never right. Long-held assumptions are rendered baseless. Hopes have become fears and fears have become hopes. Now the pundits and party leaders are frozen in wide-eyed amazement of events that they thought could never happen.

In 79 A.D. the residents of Pompeii noticed strange puffs of steam and clouds of ash emitting from Mount Vesuvius across the Bay of Naples. Pompeii was a happy, sun-soaked, prosperous – almost idyllic – city. Yet the citizens of Pompeii, ignoring the great tectonic forces at play under their feet, continued life as usual. The city had been around for 700 years, and after all, Mount Vesuvius was on the other side of the Bay.

Then on the morning of August 24 those long-building tectonic forces suddenly unleashed all their fury and Mount Vesuvius exploded. Within hours Pompeii and its 11,000 inhabitants were entombed in six metres of volcanic ash. Archaeological excavations done two thousand years later showed a people and their way of life frozen in that tragic moment.

While I admit that there maybe a little hyperbole in this analogy, my point is that ignored long-building forces have a habit of suddenly exploding and changing everything all at once leaving everyone impacted by the change gasping, “I never saw this coming!”

While we often prefer to think that politics is another reality in which we do not live, it is in truth our world cast in extreme relief. So for those of us living in our modern day version of a political Pompeii, what is there to learn from the past 18-month campaign, and how may we be affected by similar shocks?

Here are a few that I think might be worth considering:

1. When the volcano starts huffing and puffing, pay attention.

The people of Pompeii did know that Mount Vesuvius was a volcano and what it could do. They just chose to ignore it.

While many have professed shock at the presidential election results, these social tectonic forces that are now shaking the foundations of the political world have been building for decades.

Consider these facts. In 2013 only 19 per cent of Americans expressed trust in government. In the 1960’s it was 70 per cent. Only one-in-four likely U.S. voters now have confidence that when the U.S. federal government acts, it’s doing the right thing most or nearly all the time. Ninety per cent of Americans view congress unfavourably. Sixty per cent of American households have not increased their real income since the since the 1970’s. Meanwhile, five of the six wealthiest counties in the U.S. now surround the District of Columbia. Yet many in Washington are genuinely shocked that the American electorate voted for someone who has never held office on his promise of blowing up a rigged system. One wants to ask the Washington political grandees, “What part of the word ANGRY do you not understand?” Presumably they thought these events were happening on the other side of the Bay.

What volcanoes have been huffing and puffing across the Bay from your business? What are your plans if there is a sudden change at your workplace?

2. Public opinion research is not what it used to be.

Over the last 18 months, public opinion research struggled to capture the mood of the people. Surveys varied widely and changed often. In the end, this research was far less helpful than it used to be. It is not that professionals in the field are suddenly worse, which they are not, but the technological change from household landlines to wireless telephones and communications through social media have made it near impossible to create a representative sample that fairly reflects the population being surveyed.

These technological changes are not just limited to political surveys. Marketing research is similarly vulnerable. This is not to say that you should stop using market surveys. It is worth keeping in mind its vulnerabilities and limitations.

3. People are increasingly unlikely to say what they really believe or believe what they are told.

A far more disturbing trend than technology undermining polling is a spreading reluctance for people being interviewed to say what they really think. A third of survey respondents were reluctant to say that they were voting for Donald Trump. The same phenomenon occurred leading to the Brexit vote.

It is difficult to identify the precise cause of this trend, but it may have something to do with Edward Snowden’s revelations about governments’ abilities to monitor personal communications or the Wikileaks releases of millions of private emails. It might even be related to many people feeling intimidated by the current culture of political correctness.

Moreover two-thirds of Americans no longer believe what the media tells them. The irony here is that the more the largely pro-Clinton main steam media ran stories denigrating Trump, the less likely many people were to believe them.

A significant question from a commercial perspective is: are customers, consumers and, most importantly, employees similarly reluctant to share what they really think? Are they just saying what they feel is expected? Are employees, customers and the communities in which you operate less likely to believe your communication? How valid, let alone dangerous, are all your market research surveys? How can this be corrected?

4. The rumbling of the global marketplace may be the biggest volcano of all.

The most emotional response of all to Mr. Trump’s campaign was his charge that international trade deals hurt ordinary people and are really contrived to only benefit wealthy elites. The same forces were at play in the Brexit vote. Perhaps most telling of all about the extent of anti-trade feelings was that even Mrs. Clinton, a long-standing advocate of global trade, came out against the Trans Pacific Partnership, which she had once characterized as the gold standard of trade deals.

In a tangential way this issue of global no-borders trade arrangements became linked with the thorny issues of mass migration further adding to the sentiment of grievance.

The global trade deal anxiety is not limited to the U.S. Similar populist opposition is springing up across Europe as well. Regrettably it comes at a time when technology has enabled not just multi-national corporations but now the smallest of businesses to view the whole world as their market. Businesses will have to consider a number of contingencies for what could happen if new national barriers to trade and travel emerge. On the other hand, it could even create some new commercial opportunities.

5. Nobody remembers what you said but they always remember how you made them feel.

Over time few will recall the actual words of the incendiary election rhetoric. Many people will, however, remember how Mr Trump’s words made them feel hurt and vulnerable. Many others will never forget how Mrs Clinton made them feel belittled and worthless. This will result in deep national divides lasting for decades.

The reality is that we are all not only responsible for what we say but also responsible for what people hear. Bad feelings and simmering resentments in the workplace are often caused by leaders inadvertently focusing on the messages they want to say without considering what the audience hears about their needs and perspectives. This can be fatally corrosive to an organization. It behooves us all to keep this in mind.

“That’s not what I meant” is a poor excuse.

Winston Churchill once said, “Democracy is the worst form of government – except for all the others.” Elections at least prevent societies from papering over the cracks of mounting grievances. Elections also act as a valve to blow off steam. That is a good thing, so long as the mountain does not blow up.