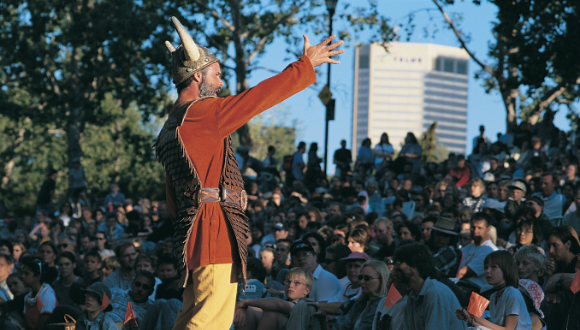 Entertainment, culture and hospitality aren’t the only things that thrive in Calgary. As Western Canada’s head office capital, Calgary is where industry leaders come to get business done. Want to be near the action? Consider the connections you’ll make when you select Calgary as your meeting or event destination.

Calgary is home to approximately one out of every seven of Canada’s major corporate headquarters. It is also the energy capital of the country, hosting the head office for every major oil and gas company in the country, as well as the home base for many of the energy sector’s largest and most influential organizations and Canada’s national energy regulator, the National Energy Board.

The city is also fast becoming a leader in renewable energy development and initiatives. This is thanks in large part to the innovative companies that reside within it and Alberta’s Climate Leadership Plan, under which the province’s Renewable Electricity Program is changing the landscape for clean and reliable energy.

The Information and Communications Technology (ICT) sector is among Alberta’s hottest. It is host to hundreds of companies employing thousands of ICT professionals across major fields such as technologies, electronics, wireless and telecommunications, geomatics and digital media.

Calgary also holds the honour of having the largest number of technology start-ups per capita in Canada. It supports the growth of all ICT companies through programs like Innovate Calgary, a partnership between Calgary Technologies Inc. and University Technologies International.

Calgary’s manufacturing sector continues to grow, employing over 50,000 individuals across 1,900 businesses. It is supported by a competitive tax regime, research and development (R&D) incentives, an ample industrial land. The industry also benefits from a highly trained, well educated, and motivated labour force.

Low taxes, a growing economy and a world-class transportation and logistics network make Calgary a business hub to contend with. Top businesses throughout the world rely on its integrated logistics solutions to move products and talent throughout the region. Calgary also plays an active role in developing tomorrow’s workforce through supply chain logistic training at the University of Calgary, SAIT Polytechnic, Mount Royal University and other educational facilities.

It’s no surprise that the home of the Calgary Stampede is also a leader in global agribusiness. Calgary accounts for nearly 11 per cent of agri-business companies in Alberta, which is itself the third largest exporter of agri-food products in Canada. Through comprehensive trade agreements and the recent formation of the Agribusiness Advisory Committee (formed as part of the 10-year Calgary Economic Development initiative), it’s an industry with unlimited global potential.

Calgary’s arts and entertainment scene continues to flourish, thanks in part to the city itself which provides the highest annual per capita spending on recreation and culture in Canada. The city hosts over 10,500 industry professionals across over 270 film and television businesses – all of which take advantage of the region’s entertainment incentives and diverse locations. As the country’s fourth-largest filming jurisdiction, Calgary is also overflowing with production resources and talent.

As for the arts, Calgary has an estimated 190 venues for live performances and over 100 locations for art displays and cultural gatherings. Its cultural hubs include the 400,000 sq. ft. Art Commons; the Calgary Film Centre; and the Glenbow Museum, the largest in western Canada. It also supports the development of tomorrow’s entertainers and innovators through educational programs at the Alberta College of Arts, The Mount Royal Conservatory of Music, SAID Polytechnic’s Information and Communications Technologies, and the University of Calgary.

Calgary’s activity puts it among the top 30 financial hubs of the world. From 2006 to 2015, the financial sector created over 3,400 jobs and contributed significantly to the growth of both Alberta and Western Canada in whole. It joins Toronto, Montreal and Vancouver as the country’s foremost financial centres.

There’s an energy in Calgary that’s hard to ignore. It’s the beating hearts of multiple industries working together to make the city one of the most active regions in the country. And with fresh talent, innovations and industry-leading organizations fueling that activity, it’s a destination whose full potential has yet to be unlocked. Visit www.meetingscalgary.com and www.calgaryeconomicdevelopment.com for more information.