Business travellers commonly use hotel apps according to a new study released by the GBTA Foundation, the education and research arm of the Global Business Travel Association (GBTA). Three of five (61 per cent) business travellers have downloaded at least one of the seven major hotel chains’ apps on their smartphone in the past year, with more than half of those travellers (54 per cent) having at least two and one-quarter (25 per cent) downloading at least three.

Business travellers most often use hotel apps to check the status of a reservation (43 per cent), manage their rewards points or account (43 per cent) and book a hotel stay (39 per cent). When breaking it down by age group, Baby Boomers (55+) are most likely to check the status of a reservation while Millennials (18-34) are most likely to use apps to find more info about available amenities, order room service and contact hotel employees, even though not all hotel apps offer these features. In general, business travellers routinely use hotel apps and are largely satisfied with their use of hotel apps for various purposes in the past year.

One-quarter of business travellers indicate using mobile-check in on their last business stay at a hotel with Millennials and Gen X-ers (35-54) doing so at a much higher rate than Baby Boomers. If keyless entry expands, travellers will likely use mobile check-in more frequently.

“Hotels have room to expand the capabilities of their mobile app as well as promote increased awareness of those capabilities as the interest is there,” said Monica Sanchez, GBTA Foundation Director of Research. “In the future, hotels could invest in innovative new technologies, but should also continue to focus on improving existing amenities, especially Wi-Fi as that remains most important for business travellers.”

Business travellers are interested in using a variety of technology amenities that most hotels do not currently offer. The most commonly indicated amenities are more regular outlets and USB outlets (34 per cent), offering streaming services (34 per cent) and in-room chargers for laptops and/or phones (32 per cent). Millennials most commonly chose streaming services as a preferred amenity they would be interested in while medium- and high-frequency business travellers most commonly chose maintaining “guest profiles” to deliver a personalized stay. 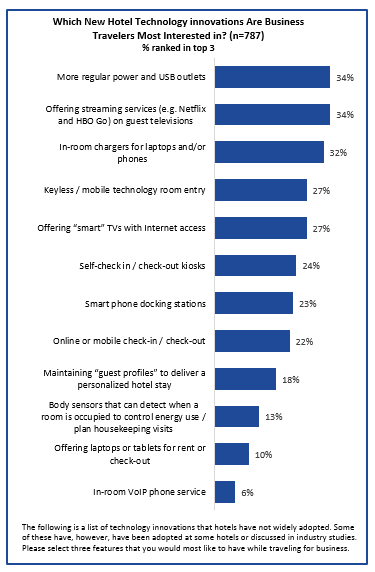 Internet access still reigns supreme for business travellers when it comes to hotel technology. More than half (55 per cent) spend at least one hour per day using in-room internet access for business purposes with a similar share (48 per cent) also using it for at least one hour per day for leisure purposes. Satisfaction with in-room internet access is generally high with 75 per cent or higher satisfaction rates for spend and connectivity, but slightly lower levels (62 per cent) for security. Additionally, 73 per cent of business travellers used Wi-Fi or high speed internet in a hotel common area in the past year.

Three of five (61 per cent) used free in-room Wi-Fi or high speed internet available to all guests, while 16 per cent received free in-room internet access because they booked direct, were a member of the hotel’s rewards program or had special/VIP status. In the future, a majority of respondents say they are “more likely” or “much more likely” to book directly in exchange for free Wi-Fi or high speed internet, however, the reality is most can obtain free basic Wi-Fi by simply being part of a loyalty program regardless of booking channel.

The study, Hotel Technology Study: How Do North America-Based Business Travellers Use and Feel about Hotel Technology?, is available free of charge exclusively to GBTA members by clicking here and non-members may purchase the report through the GBTA Foundation by emailing pyachnes@gbtafoundation.org.

A webinar featuring industry experts will take place on November 9 at 2pm ET. Registration will be available soon.