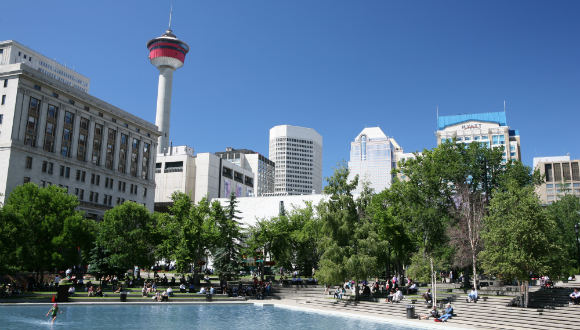 For big plans and bold ideas, few destinations are more accommodating than Canada’s Stampede City.  As home to hundreds of unique venues, ample food and entertainment and one of the richest cultural scenes in the west, Calgary’s wealth of offerings make it an ideal locale for events of all sizes.

Part of Calgary’s allure is its capacity. The city boasts 1.2 million square feet of meeting space, including a generous mix of convention spaces, meeting rooms, conference halls and exhibition venues. Among its selections include the BMO Centre, Calgary’s largest meeting venue in the heart of Stampede Park, and the world-class Calgary TELUS Convention Centre, which hosts over 450 conventions and conferences annually.

As for places to kick up your feet, Calgary has thousands of guest accommodations. Whether it’s a brand-name hotel or a stylish B&B, there are “homes away from home” to match any event theme or group.

“Planners appreciate the options that Calgary affords,” says Heather Lundy, Director of Marketing and Communications with Meetings & Conventions Calgary. “We have over 13,000 guestrooms ranging from budget-friendly to 4-star accommodations, and there are 4,000 in the downtown core alone.”

But there’s more to do than catch a good night’s sleep. Calgary’s downtown offers an endless variety of entertainment and networking possibilities to cater to every taste. Whether it’s shopping at over 1,000 stores, spending an evening at one of its 50-plus nightclubs and pubs, or joining colleagues on a trip to one of 18 major tourist destinations, there’s no such thing as nothing to do.

And with over 200 restaurants in the downtown alone, says Lundy, a memorable meal is always just steps away: “Calgary has become well known over the past few years for its diverse culinary scene. Many restaurants have won prestigious awards and many local chefs have made their marks appearing on shows like Chopped Canada. Of course, we’re known for our Alberta beef, but there is so much else to discover.”

Building on that sense of discovery, Calgary offers a wealth of outdoor activities. On top of 8,000 hectares of green space and miles of walking and biking trails; event attendees are just a short drive away from natural hotspots like the Canadian Rockies, Banff National Park and Lake Louise. Whether the day calls for a scenic hike or a round of golf, fly fishing or horseback riding, Calgary grants full access to the great outdoors.

“There are so many activities at our doorstep, and since we were home to the 1988 Winter Olympics, that also includes zip-lining, cycling, luging and skiing at the Winsport Canada Olympic Park,” explains Lundy.

When it comes to making a big impression, size truly matters. And whether it’s the city’s massive selection of meeting space and accommodations, its rich spread of restaurants and networking venues or its countless options for indoor and outdoor fun, Calgary is an event destination that never stops growing.

Find out how big Calgary really is by visiting  www.meetingscalgary.com.