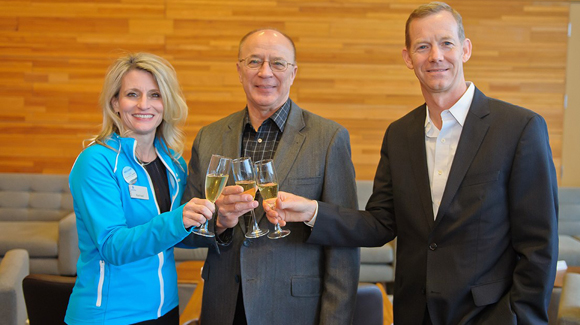 Tourism Vancouver is raising a glass to Rachael Riggs, manager of Meeting and Convention Sales, Midwest U.S., who accepted the award for Supplier of the Year at the PCMA Education Foundation’s 2016 Visionary Awards.

More than 1,000 industry professionals recently gathered at the Marriott Marquis in Washington, DC to celebrate influential leaders in business events. The Oscars-like evening – complete with red carpet, awards show and after-party – was hosted by the PCMA Education Foundation, an association devoted to professional development and advancing the meetings and conventions industry. The event recognized the winners of four coveted Professional Excellence Awards, including Event Designer, Community Advocate, Meeting Professional and Supplier of the Year.

“I am humbled and honoured on so many levels to receive PCMA’s Supplier of the Year award,” said Riggs. “This win belongs to the entire Meetings & Conventions team at Tourism Vancouver, as well as Vancouver’s hospitality community and our industry partners. Our successes are a direct result of the support, creativity and collaboration we share on a daily basis.”

Tourism Vancouver commends Rachael on her exceptional contributions to the Meetings & Conventions team as well as the meetings industry as a whole.