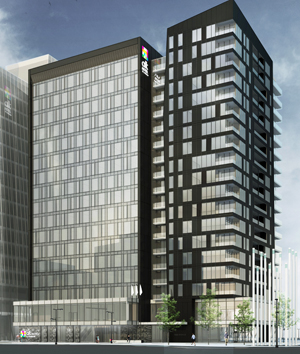 A preliminary rendering of the new Alt Hotel Saskatoon.

In collaboration with City of Saskatoon, new Alt Hotel to open in evolving River Landing area

Group Germain Hotels is adding a new Alt Hotel to the dynamic River Landing area of Saskatoon, Saskatchewan in 2018. The stylish property will be a key feature of the city’s extensive River Landing development project, a new extension currently under construction in the south downtown business district.

“We are pleased to be working closely with Greystone Managed Investments Inc., Victory Majors, Triovest and the City of Saskatoon on the opening of our newest Alt Hotel,” states Jean-Yves Germain, co-president of Group Germain Hotels. “This new location, in the vibrant River Landing area of the city, represents our third Alt Hotel property in the western provinces. It’s an ideal location and an exciting marker of the steady progress towards our goal of offering 20 properties to visitors across the country by 2020.” The first Alt Hotel in western Canada opened in Winnipeg, Manitoba in 2015. Alt Hotel Calgary, Alberta, is scheduled to open in 2017.

The 15-floor Alt Hotel will be located northeast of the intersection of Spadina Crescent East and 2nd Avenue, in front of the Remai Modern Art Gallery and within walking distance of many of the city’s other main attractions. All 155 guest rooms will offer beautiful views of the South Saskatchewan River. The property will also boast 4,000 square feet of meeting space outfitted with the latest technology, a fitness centre and space for a restaurant.

One of Canada’s fastest growing communities, this vital city of more than a quarter million residents is a magnet for a diverse range of industry, businesses and talents. Saskatoon is home to one of Canada’s most beautiful university campuses, the University of Saskatchewan, which also serves as a hub for leading-edge technology. Major attractions like the Remai Modern Art Gallery, as well as a long list of popular annual music and arts festivals, continuously delight culture-minded residents and visitors.

“River Landing was once a vision and is now a reality,” says Mayor Donald Atchison. “More than 360,000 people visit River Landing every year and Group Germain Hotels’ proposed investment further underscores Saskatoon’s position as a major draw for business and leisure travelers.”

About the River Landing development

The development represents a substantial social, cultural and commercial enhancement to the River Landing area of Saskatoon. The 36-acre riverfront district already features attractive parks, pathways, amenities, residential developments, businesses, retail stores, restaurants and markets. In addition to the Alt Hotel, the 2.84-acre extension will feature a unique condominium development, as well as two properties housing a mix of office and commercial space.

Known as “Parcel Y”, the new development at River Landing is owned through a joint venture partnership between Greystone and Victory Majors. Triovest, one of Canada’s leading real estate advisors, has been appointed the Development and Leasing Manager for the project.

Ted Welter, Managing Director, Real Estate and Mortgages for Greystone Managed Investments Inc. commented, “Through the unique cooperation and support of the City of Saskatoon and the Nasser family, we are excited to see the River Landing development become a reality. It’s a tremendous step forward in what we believe is one of the more important land developments in Saskatchewan. Based on pre-leasing interest and momentum, particularly in office space, we look forward to the execution of the future phases of this development over the coming months.”

Blair Sinclair, Executive Vice-President, Investment and Development for Triovest Realty Advisors Inc. states, “From a personal perspective, and as a former resident of Saskatoon for 30 years, it is both an honour and very exciting to be part of this prestigious project. Group Germain Hotels’ announcement is tremendous news for the City of Saskatoon and demonstrates the confidence that all parties have in both the River Landing location and the future of the Saskatoon economy. Triovest is thrilled to be working with Group Germain Hotels, Greystone Managed Investments Inc. and Victory Majors in overseeing this prominent development. We look forward to continuing to collaborate with the City of Saskatoon and the ownership group in setting a new vison for the property that is in keeping with the City’s strategy to revitalize the South Downtown Business District.”

“We are very excited for the City of Saskatoon regarding the direction this project is taking,” adds John Nasser, president of Victory Majors Investments Corp. “We are extremely happy with the progress that is being made through our partnership with Greystone Managed Investments Inc. and through the development expertise of Triovest.”