I will admit that my two particular passions for American history and baseball may cloud my view. A couple of weeks ago, I had the rare pleasure of visiting one of the greatest special event venues of all time – Yankee Stadium. 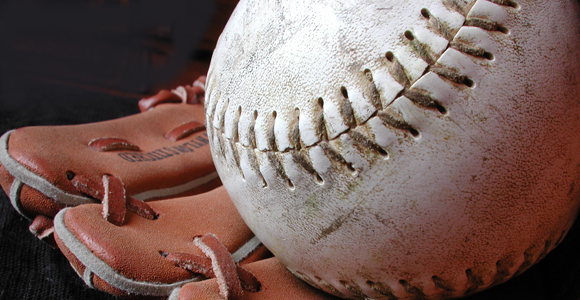 I was there to see the Toronto Blue Jays win a resounding victory over the New York Yankees. The Blue Jays took a five run first-inning lead and went on to win 11 to 5, which made the evening particularly relaxing and enjoyable. It also put me in a mood to reflect on what made Yankee Stadium so special.

While I have been to baseball games in Philadelphia, Chicago and Cincinnati as well as our own beloved Rogers Centre, this was my first time at Yankee Stadium. For years I have heard stories about what a tough area the Bronx is and how perilous the subway ride can be. We rode the express D-line, which only took minutes from mid-town Manhattan. The station is directly across the street from the stadium. It is no more than a three minute walk.

The crowds were cheery and the street venders unobtrusive. I, like thousands of others, was decked out in my Jays paraphernalia. I worried that donning Blue Jays clothing might attract some hostile comments from the locals. In fact, the Yankee fans were friendly despite this being a series that could determine who will win the American League East.

What impressed me most walking up to the stadium was the majesty of its design. This stadium opened in 2009 but reflects much of the iconoclastic design of the original Yankee stadium that was located one block away. There is an undoubted air of tradition and American self-confidence. For example, the Indiana limestone exterior mirrors that used on the original Yankee Stadium built in 1923.

On entering there is an awe-inspiring hall that embraces the stadium with enormous photographs of Yankee greats. So many of the Yankee notables, such as Babe Ruth, Joe DiMaggio, Lou Gehrig and Mickey Mantel, are not only famous baseball players but also beloved Americans. The visitor is left in no doubt that these are hallowed grounds. 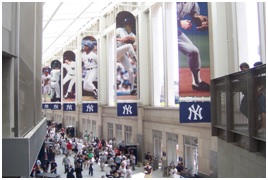 Going through the hall towards the field there is what seems to be the world’s largest food court. It serves all the regular baseball fare of hotdogs and beer to the trending sushi and ginger chicken. My companion had a delightful mix of the traditional with the Avant-garde – Cracker Jacks and a glass of Chardonnay. It was quickly dubbed ChardonJay in honor of the visiting team. Very friendly and engaging staff served the food quickly, but regrettably, at New York prices.

Walking out to the seats, the first impression is the sparkling, Kentucky bluegrass like that found in the original stadium. The new stadium also incorporates the unmistakable frieze that lined the roof of the old Yankee Stadium. There is also the famous right field “short porch” that was designed to accommodate Babe Ruth’s left-handed batting home runs. The highlight is when the Yankees make their appearance on the field in their famous pinstripe uniforms that have not changed in 60 years. It is claimed that the Yankees thought that the pinstripes would provide a slimming affect to the otherwise portly Babe Ruth.

Yankee Stadium has accompanied America through wars, depression, spectacular success and shocking tragedy, such as the World Series only weeks after the horrors of 911 and the twin towers.

Yankee words and deeds have transcended baseball to the larger American lexicon.

Babe Ruth, when asked during the depression how he could justify making more money than the President of the United States, replied, “I had a better year.”

When Lou Gehrig was dying of the disease that would become eponymous with his name told the Yankee faithful as he reflected on his opportunity to play baseball, “You have been reading about the bad break I got. Yet today I consider myself the luckiest man on the face of this earth,” he captured both the heart and spirit of a nation.

The great Joe DiMaggio, who was the second of three husbands of Marilyn Monroe, yet was the only one to step forward to arrange her funeral. He represented a unique American grace that was immortalized in Simon & Garfunkel’s song “Mrs. Robinson.”

Of course there is the most quoted athlete in history, Yankee catcher Yogi Berra (who doesn’t love the name?) who famously said so many things such as; “Baseball is 90 per cent mental and the other half is physical.” “If you don’t know where you are going, you might wind up someplace else.” And my favorite, “You can observe a lot by just watching.”

I realize that some will read this and say, “Yikes, it is just a baseball game!” Yet, sometimes it is the simplicity of a shared game without the ambiguity of life that lets us hold and pass down to future generations memories and values that can so long endure.

The venue of Yankee Stadium has succeeded in both modernizing and still exemplifying those historic national characteristics it epitomizes. That is not easy. Once lost it is almost impossible to reclaim.

The Montreal Forum played much the same role for Canada. Were Howie Morenz, Rocket Richard, Jean Beliveau, Ken Dryden and all those great Stanley Cups not part of our shared patrimony? Somehow, I feel that when the Forum was torn down rather than rebuilt we lost much of what bound us together as a nation. The Montreal Canadiens have not won a Stanley Cup since they abandoned the Forum. Perhaps that is the gods of tradition reminding us that which is lost cannot be recovered.

I have no doubt that the traditions of Yankee Stadium will continue. Future athletes who play on that Kentucky bluegrass will come to exemplify their times and more World Series pennants will flutter alongside those classic friezes atop the stadium. I just hope that it is not this year. We have some memories we need to keep building at the Rogers Centre. When Tom Cheek said, “Touch ’em all, Joe”, he captured a moment in our national life. We need our next chapter now.