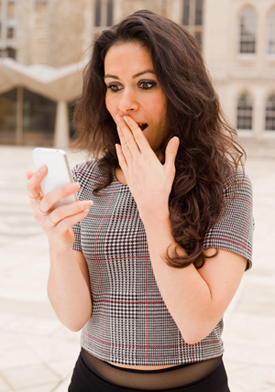 I recently published an article entitled Employee conduct outside the workplace: When should employers take action? In the article, I discussed how the NFL had managed two cases of family abuse involving their players and the extent to which employers had control and accountability for their employees’ words and deeds away from the work place. I acknowledged that as an employer the NFL did hold a very unique place in the public mind compared to most other employers but wondered what sort of precedent it would set for other employers.

Only a month later, with another sort of football – soccer – there was an incident in Toronto that confirmed the risks and challenges of social media to employers and employees. On May 10, Shauna Hunt, a City TV journalist, was conducting interviews with fans outside BMO Stadium after a Toronto FC soccer match.  A number of fans started to shout unrepeatable obscenities behind her as she conducted the interviews. Finally, out of frustration she confronted those heckling the profanities. Apparently, this sort of behaviour has become a not uncommon phenomenon, which regrettably seems symptomatic of the increasing vulgarization of popular culture.

City TV aired the encounter with the hecklers and posted it on the web. Within hours, media around the world picked up the story. There were almost five million views of the event on YouTube, and it became the subject of intense Twitter postings. A search soon identified the individual as an employee of Hydro One, an electricity distributor.

One can only imagine the heart-stopping, blood-draining-from-the-face reaction in the executive corridors of Hydro One as the news seeped through that it was one of their own. Almost instantly, there were demands – often shrill, vulgar and menacing – on social media for Hydro One to take action, as if they were responsible for the employee’s reprehensible behaviour. Within 24 hours of the incident appearing on television, Hydro One announced that it was terminating the employment of the individual thereby tacitly acknowledging that they do exercise some responsibility and control over their employees’ non-work related activities.

The incident confirms that these sorts of media crises do not just happen to high profile organizations such as the NFL. The reality is that this sort of brand damage can happen to any employer and employee any time. It could happen to a business tomorrow – perhaps even later today. So the first lesson for everyone is: Be ready.

As I discussed in my previous article about the NFL, the core question is to what extent should an employer hold an employee accountable for things that they say and do when not at work?

Similar to the two NFL players that I discussed, there is no question that the incident did not occur on company premise, with another Hydro One employee or during working hours. The employee did not identify himself by name nor say who his employer was. The employee did not post any of this on the web. It was the City TV journalist who approached him and ask for a comment. It was City TV’s decision to air the story and post it.

To be clear, none of this is to excuse the behaviour of this individual. It does, however, highlight the need for greater clarity as to what the role of the employer is or ought to be. There is a need to understand what sort of precedent an employer taking action such as terminating an employee sets for future actions. What if similar comments are said in a bar and someone records it on a telephone and posted it on the web? What if such a recording is only sent to the CEO? Would that be cause for dismissal? What if this had been said in a private residence, should the employee be fired? How obscene is obscene? What if the comments had been political in nature? What if it had been seen but never televised? The point is, where does one draw the line? Now is the time to think through these potential scenarios.

Having established that this can happen to any employer or employee at anytime, there is a need to be ready. Let me make a few suggestions on how a business can prepare for this very new and always imminent reality that now exists:

There has been a lot of comment about the legal challenges associated with this issue. What does employment law say and require? What are the duties of employers? What are the constitutional rights of free speech? To what extent can an employer limit those rights?

There has been the view expressed by several police forces that this sort of behaviour is criminal. If it is, then an employer might defer to the courts and let the law take its course rather than being forced to become a proxy judge and jury. If it is indeed criminal behaviour, the police hauling a couple of the miscreants off to jail might do more to stop this behaviour all together than anything that an employer can do.

This is all new and complicated legal ground. You do not want to be figuring out what your legal duties and liabilities are as you watch the YouTube clip for the first time.

As with the legal considerations, are there human resource policies in place that are clearly stated and widely known? Are there precise policies with respect to public behaviour or speaking to the media? Resorting to vague references about company values and customer expectations no longer seems sufficient. Importantly, are the actions being taken in a particular case consistent with those H.R. policies?

Hydro One generally handled this very well. It was surprising though that they acknowledged that the individual in question was an employee and had been terminated. The general H.R. policy is to not publicly discuss personnel matters. It is a valid approach that has withstood the test of time.

A CP story posted on the CBC website said that a “Hydro One official identified one of the men involved in Sunday’s incident. The official spoke on condition of anonymity because he was not authorized to name him for privacy reasons.” If this is the case, the first rule in a crisis is that no one speaks to the media without authorization and attribution.

Practically every employee uses social media. They are aware of the great benefits and profound risks associated with social media. One of social media’s great benefits is its democratizing affect. Why not use a similar democratic approach to developing a company policy on non-work related behaviour? Rather than declaring a policy from the boardroom, encourage a company-wide conversation from which emerges a consensus policy that employees feel they own because they helped to created it.

In a crisis such as this, a clearly articulated, widely understood and broadly supported policy is the best defense for any actions that need to be taken.

There is a limit to the involvement and control that employers can have in employees’ lives. Employees are first and foremost citizens, not indentured company servants. They have a right to believe and say what they think. Their employer neither has nor wants to play the role of master, police or church.

There will be times when employees say or do things that many will find objectionable. As has been seen in many cases, this will result in a crush of Twitter messages, emails, even demonstrations demanding that the employer do something – right away! In some cases the response on social media has been so vitriolic that I would almost characterize it as a cyber lynching. Regardless of the pressure or criticism, an employer needs to be able to say where it draws the line between an individual’s duty to their employer and their rights as citizens of the country. It is a line that will not be crossed.

Soccer is rightly known as “the beautiful game”. It is too bad that some of its followers couldn’t reflect that sentiment instead of the madness that we witnessed.