The Center for Exhibition Industry Research (CEIR) announces that data collected for the annual CEIR Index report for the second quarter marked the twelfth consecutive quarter of year-on-year growth increasing 1.2 per cent overall, which is down only slightly, 0.3 percentage points, when compared to the second quarter of last year. While the growth of the exhibition industry was on par with GDP in the first quarter, the exhibition industry slightly lagged behind the macro economy as real GDP gained 1.4 per cent year-on-year.

“Overall, the second-quarter results continue on a positive upswing, and they confirm that the exhibition industry has effectively weathered the recession and is a valuable business practice despite ongoing uncertainty from lawmakers in Washington,” says CEIR’s economist Allen Shaw, Ph.D., Chief Economist for Global Economic Consulting Associates, Inc. 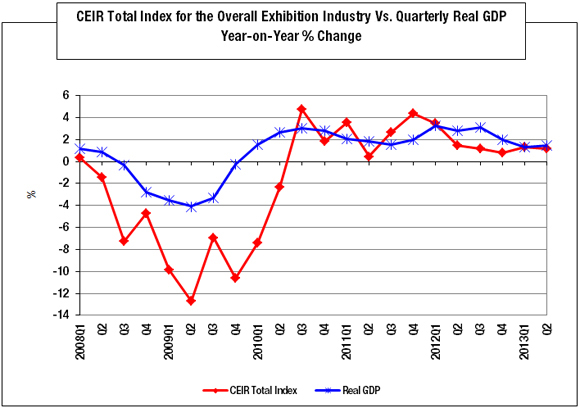 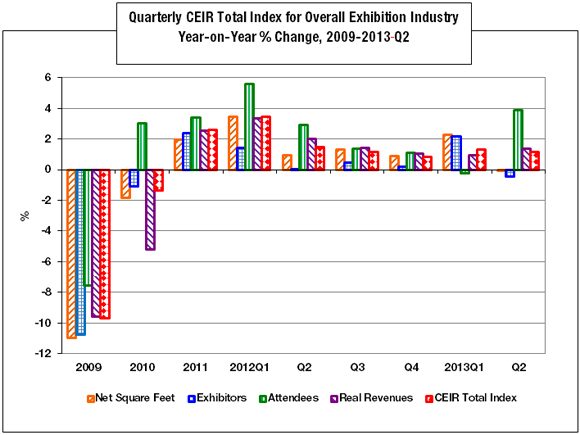 By industry sector, the leaders so far in 2013 have been professional business services (BZ) increasing 3.9 per cent, raw materials and science (RM) increasing 3.9 per cent and food increasing 3.4 per cent. Conversely, the government (GV) sector declined dramatically, by nearly 10 percent, which is attributed to retrenchment of state and local government expenditures and sequestration imposed on federal government limiting government attendees at exhibitions. CEIR’s economists found the biggest surprise with the building, construction, home and repair (HM) sector which declined by 1.8 per cent even though real estate construction had a strong rebound during the same period.

It is anticipated that there will be minimal growth through 2013; however, the exhibition industry will gain momentum in 2014 and track with GDP growth for the long-term.