Steadied growth for 2013 is the outlook for the exhibition industry based on first quarter results reported today by the Center for Exhibition Industry Research (CEIR). Data collected for the first quarter of 2013 CEIR Index was in line with CEIR forecast and reveals that the Total Index increased by 1.3 per cent compared to the same period in 2012, but fell behind real GDP which gained 1.8 per cent during the same period.

This was a modest acceleration from the 0.9 percent growth seen in the fourth quarter of 2012. Growth from the individual metrics are promising with the most substantial gains seen in net square feet gaining 2.3 per cent followed by exhibitors which showed a 2.2 per cent increase, and Real Revenues increased by 1.0 percent; however, there was a slight decline of 0.2 per cent in attendees which is attributed to the weakness of government employee participation. 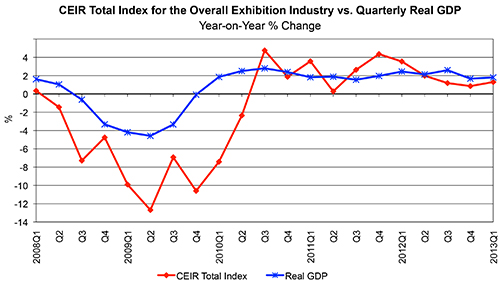 “Overall, the first-quarter results are positive and confirm that the exhibition industry has survived and emerged from the recession,” says CEIR’s economist Allen Shaw, Ph.D., Chief Economist for Global Economic Consulting Associates, Inc. “With eleven consecutive quarters of growth as well as our predictions closely matching outcomes, we are confident in the continued growth and progress of the industry.” 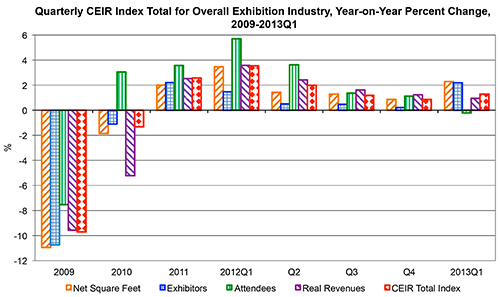 “With the decline in attendance, we are closely monitoring business-to-business exhibitions especially for trade shows that depend on government employees’ participation to determine how much of the attendance decline is directly attributable to Sequestration,” says CEIR President and CEO Douglas L. Ducate, CEM, CMP. “Based on media reports from lawmakers in Washington, it appears unlikely that both parties will reach an agreement on a ‘grand bargain’ in the near future; therefore, this period of uncertainty is likely to continue through 2013.”